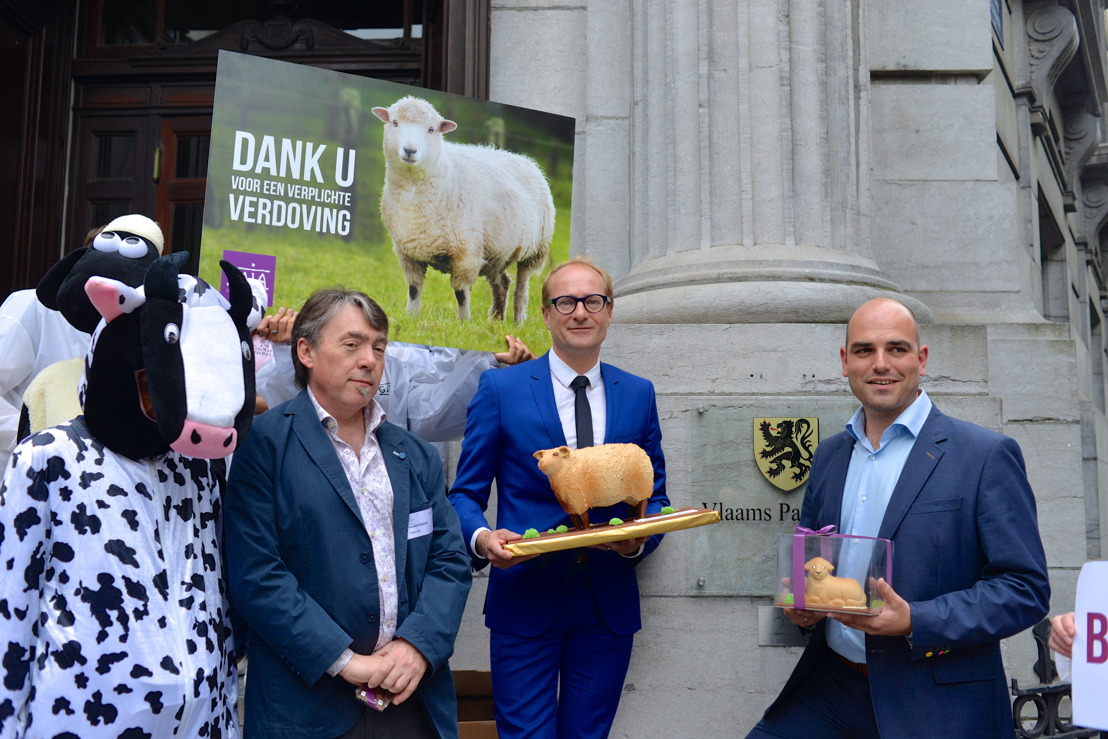 Friday, June 30, 2017 — “This is a battle we’ve been waging for 22 long years, and it is finally coming to an end: 42 days after the Walloon Parliament, the Flemish Parliament is also ending (after a transitional period of a year and a half) the unnecessary and avoidable suffering of hundreds of thousands of sheep and cattle currently being slaughtered without prior stunning in the name of religious tradition. This is an historic event, which also honours GAIA’s 25th anniversary this year!”

“We want to show you our gratitude,” explains Michel Vandenbosch. “Each of you, in your own way, has struggled with this issue over the years, and has made possible today what would have been unimaginable just two years ago.”

The Flemish decree requires that as of 2019, sheep must be rendered unconscious before slaughter by means of reversible electric stunning, called electronarcosis. For cattle, stunning will take place immediately after the animal’s throat is cut (post-cut stunning) until the method of reversible stunning is adapted for the particular breeds of cattle in Belgium.

As soon as the technique is fully adapted (a study is being carried out at the University of Bristol), cattle must also be stunned by electronarcosis before their throats are cut. With this method, the animals are unconscious for 1 ½ to 2 minutes, and will regain consciousness if they are not slaughtered. This technique thus respects Muslim requirements that the animal doesn’t die as a result of stunning: the heart must continue beating. Scientific evidence also proves that electronarcosis conforms with Jewish demands that the animal’s blood must be completely drained.

On the occasion of the vote, a delegation of 25 GAIA representatives presented Flemish MPs with a chocolate tablet bearing the image of a sheep. “This was to thank them for respecting the wishes of 85 % of the public, who demanded this prohibition.”

Flanders is not alone on this issue. On May 17th, the Walloon Parliament had already unanimously approved (except for 3 abstentions - 1 from Ecolo and 2 from PTB) a ban on slaughter without stunning. Mandatory, reversible stunning will be required in Wallonia as of September 1, 2019 for sheep, goats and cattle.

Elsewhere in Europe, Sweden, Slovenia and Denmark already require animals to be rendered unconscious before bleeding. Austria, Estonia, Latvia and Slovakia mandate stunning to take place immediately after the animal’s throat is cut. And stunning before slaughter is also required in Norway, Switzerland and Iceland.

GAIA calls on the Flemish government and all political parties to make good use of the transitional period in order to facilitate implementation and enforcement of the new law. The decree is no way directed against religious practice, but seeks only to prevent scientifically proven and entirely avoidable animal suffering. Michel Vandenbosch comments: “I hope that the message from the representatives of the faiths concerned will emphasize the necessity of respecting the law in the interest of animal welfare and good relations between the various communities.”

After Wallonia and Flanders, it’s high time the Brussels-Capital Region finally decides on a ban against slaughter without stunning, says GAIA.