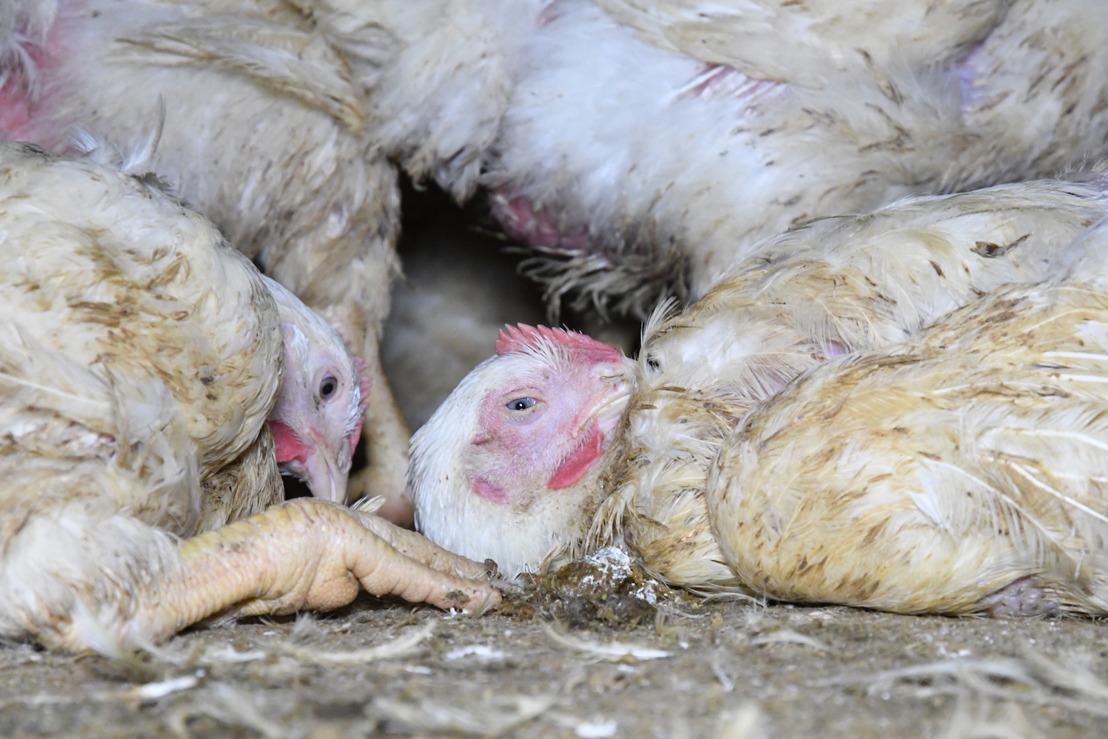 Tuesday, March 13, 2018 — Taken between October and December 2017, GAIA’s hidden camera footage brings to light the hell and misery of so-called "broiler" chickens in six Flemish broiler sheds. The images are painful to see: animals in agony, lame and deformed, burns on feet and skin (dermatitis); abdominal swelling (dropsy)... "If these images prove one thing, it’s that chicken is so cheap because it’s the animals that pay the price," says Michel Vandenbosch, president of GAIA. "We also noticed that minimum legal standards were not met in the broiler sheds we visited. GAIA strongly denounces the cruel mass exploitation of broiler chickens in the factory farming industry.”

GAIA documented the industrial living conditions of chickens shortly after their arrival in the broiler sheds until just before their trip to the slaughterhouse. With each passing day, their suffering worsens… The birds can hardly move, owing to leg malformations and lameness. They grow so fast that their legs can no longer support the weight of their body. Many are no longer able to walk at all, and so move as best they can by crawling and flapping their wings. The chickens wind up spending most of their time lying down, in their own droppings. The wet, filthy litter releases high concentrations of ammonia, which causes burns and blisters to their feet and chest. For many, access to water and food thus becomes impossible. An incalculable number of chickens lie dying, on their backs, gasping for air, while others keep growing only to succumb to what the sector calls "sudden death syndrome." Their carcasses litter the ground, among the "survivors." To ensure that a sufficient number of chickens manage to live until slaughter, they are given antibiotics.

In order to produce a maximum of meat in a minimum of time, the sector uses a specific breed of chicken, bred to grow extremely quickly. The birds are kept in overcrowded sheds: 15 to 23 (or more in some cases) per square meter – basically one chicken per area of an A4 sheet. Within 42 days, the birds go from a body weight of 50 g to more than 2 kg on average (a gain of between 1.7 and 2.8 kg, an increase of 4500% of their initial weight!). In the 1950s, chickens would only reach this weight after 120 days.

After a short life of six weeks, the chickens are sent to the slaughterhouse, cut up, and sold cheaply on supermarket shelves. At this age, they are basically still chicks in an over-developed body. Supermarkets are largely responsible for this situation. By offering consumers chicken meat at ridiculously low prices, they are collaborators in an organized and large-scale system profiting from animal suffering. Michel Vandenbosch had this to say: "We shouldn’t fool ourselves: these images are no exception. They are representative of the entire sector. It's the chickens that pay the price.” GAIA is calling on supermarket chains to assume their responsibilities. "They must stop selling chicken from such facilities and buy only from those that respect animal welfare. If not, they continue to support intolerable cruelty against animals."

Specifically, GAIA demands the use of slower-growing breeds of chicken, no more overcrowding (without exception), dry and clean litter, and access to covered outdoor runs.

According to the figures of SPF Economy, 300 million chickens were raised and slaughtered in Belgium in 2017. In our country, 90% of chicken farmers are affiliated with Belplume, supposedly a Belgian label of “quality." One of its stated requirements is “concern for the health and welfare of animals.” "One thing is clear when you see these pictures: in practice, Belplume's rules are a joke," says Michel Vandenbosch." With such conditions, it’s indecent to speak of animal welfare."

Suffering of chickens has become the law

And what does the law say? “The EU legislation does absolutely nothing to stop the suffering of these animals,” explains GAIA’s president. The 2007 EU Directive, which has been transposed into Belgian law, provides for some low minimum standards, but even these rules are not respected.” For example, chickens that are seriously injured or showing clear health problems should either be euthanised immediately or receive appropriate treatment. “From the film footage, we see clearly that sick or injured birds receive no care whatsoever.  They lie in agony for a long time.” The law also requires that the animals have permanent access to dry, clean litter, which is far from the reality, according to the investigative video. “In other words, this abject system of industrial exploitation has become the rule,” concludes Michel Vandenbosch.

It is not GAIA’s primary intention to unveil that minimum legal standards are not met but rather to denounce the structural causes of animal suffering. “Standard industrial animal farming has a catastrophic impact on the welfare of 300 million broiler chickens who annually suffer in horrendous conditions”, says Michel Vandenbosch.

GAIA invites consumers to write to their supermarket via the website www.pouletbiendecheznous.be to put a stop to the intolerable agony of 300 million chickens each year.