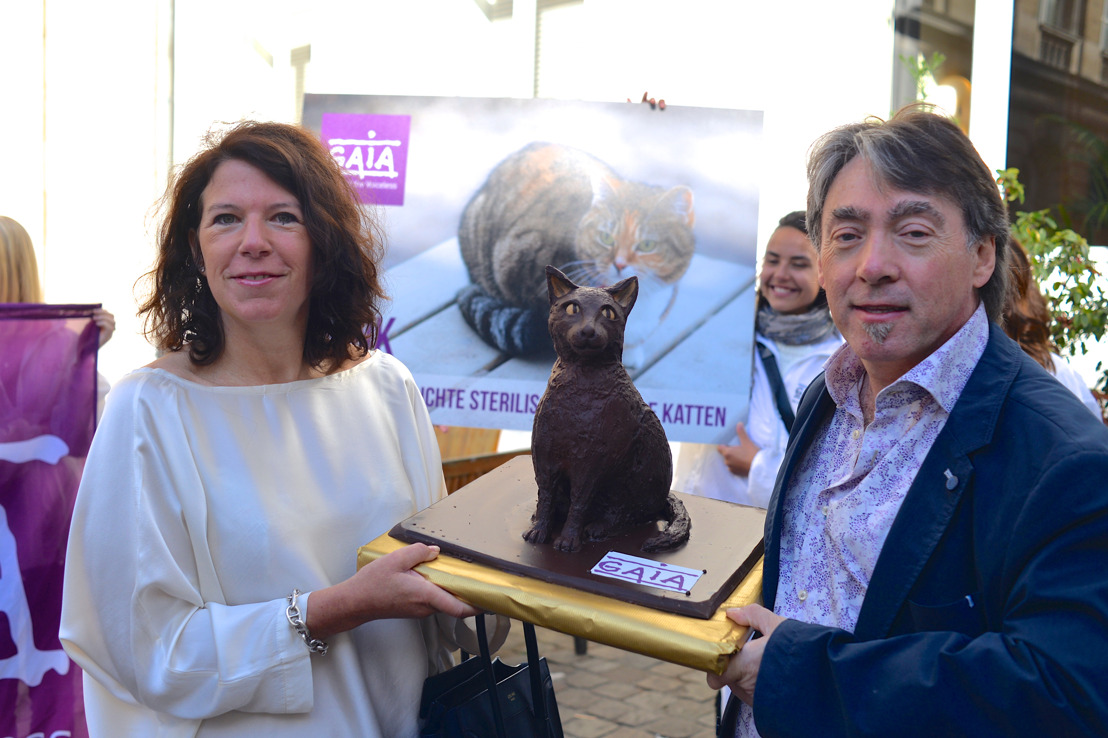 Friday, July 14, 2017 — GAIA organised a happening yesterday morning outside the government headquarters of the Brussels Region, in grateful recognition of the ministers’ adoption this very day, on second reading, of a ministerial decree providing for compulsory neutering of all domestic cats. A delegation from GAIA took the opportunity to give the Brussels Vice-Minister in charge of animal welfare, Bianca Debaets, the initiator of the decree, a life-size chocolate cat made especially for the occasion. For Ann De Greef, Director of GAIA, this new law marks a definite step forward for cats’ welfare: “By adopting into law this initiative by Vice-Minister Debaets, the Brussels-Capital Region has shown, just like Wallonia before it, that it wants to attack the problem of feline overpopulation at its root. GAIA applauds this decree which will save thousands of cats each year in the Brussels Region, and sincerely hopes that Flanders will soon do likewise!” The entry into force of the decree is scheduled for January 1, 2018.

Specifically, the new law requires that all domestic cats more than six months old, born after January 1, 2018 must be neutered or spayed. A six-month transitional period (until June 30, 2018) is provided for all cats born before 2018. The text nevertheless grants an exception to professional breeders of pedigreed cats.

Among cats, 1 plus 1 usually equals 6, and this sometimes several times per year! Thus, “letting Nature take its course” amounts to bringing 36 more cats into the world in about 16 months, who more often than not wind up killed. In addition, overcrowded shelters can no longer cope with the influx of abandoned and rescued cats.  By way of example, of the 4,084 cats and kittens taken in by shelters in 2016 in the Brussels Region, 1,425 (38%) had to be euthanised because of limited shelter space and lack of adopters. Furthermore, these tragic statistics fail to take account of all the unwanted kittens born each year who are coldly “disposed of” by private individuals.

Tackling the root cause of the problem

In order to spare thousands of cats a life of misery and premature death, there was only one good solution: the adoption of a law making it mandatory to neuter and spay pet cats. Thankfully, the government of the Brussels Region finally heeded the outcry from animal welfare associations and actors on the ground. This decision followed a favourable opinion from the Brussels Animal Welfare Council of April 10, 2017, to which GAIA fully contributed as a representative. It listed measures to be taken with regard to the problem of stray cats and overcrowding in shelters.

Faced with the unfounded fears from some quarters about this new law, Ann De Greef is reassuring: “It is illusory to worry that the European pet cat is in danger of extinction as a result of this law. Nevertheless, GAIA will regularly assess the situation, in order to allow relaxation of the law if an eventual balance is achieved between abandonments and adoptions in shelters.”