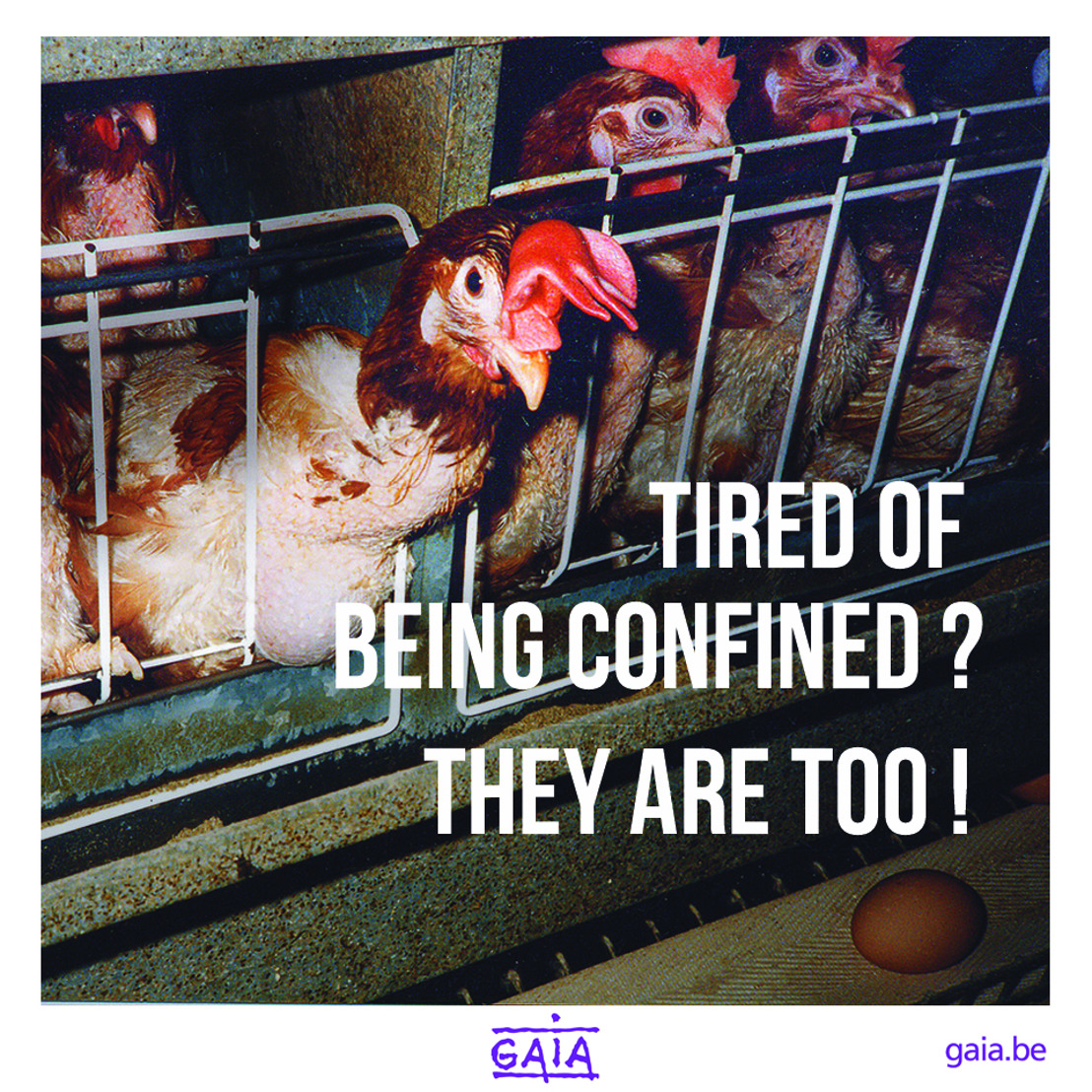 Tuesday, May 19, 2020 — Brussels, 19 May 2020 –  Since yesterday, the 18th of May, large-format posters were put up alongside Flemish roads. The slogan “En wanneer mogen zij uit hun kot?” (And when will the lockdown end for them?) aims to remind Ben Weyts (N-VA), the Flemish Minister of Animal Welfare, of his promise to impose a ban on cages for laying hens. The posters mark the start of a new campaign.  GAIA calls on everyone to sign the animal rights organisation’s petition to ban cages for laying hens. “Laying hens are confined to the equivalent of the surface of a single sheet of paper in so-called enriched cages,” says GAIA president Michel Vandenbosch. “We must move away from this cruel chicken farming system towards more animal-friendly systems.” The timing of the campaign is timely. Considering the easing of Flemish quarantine measures, we can go out more often. Its the right time to raise the question when the lockdown will end for laying hens too.

A European directive prohibits conventional battery cages in which a laying is confined to two-thirds of the space of a single sheet of paper. In the European Union it is nevertheless still allowed to confine chickens in ‘enriched’ cages. In an enriched cage the surface area available to one chicken equals the size of approximately one single sheet of paper. In Belgium, about 60% of the laying hens are still kept in enriched cages. Since October 2018, enriched cages have been prohibited in the Walloon region. Nine Wallonian farms that still keep laying hens in enriched cages must cease their activities by 2028 at the latest. GAIA is taking action now to introduce an identical ban in Flanders.

Deeds, not words
In the previous legislature, Flemish Minister of Animal Welfare Ben Weyts (N-VA) announced his intention to introduce a ban on cages for laying hens. Under the Flemish coalition agreement (animal welfare policy note, 2019-2024) the government undertakes to phase out the cage system. “Deeds, not words,” says Vandenbosch. “With our campaign, we aim to encourage the government and the Animal Welfare Minister Weyts to put their promises into practice.”

Enriched cages are not animal-friendly. Indeed, animals cannot stretch or shake out their wings in these cages. The lack of space hinders chickens in exhibiting natural behaviors such as taking a dust bath, scratching, smoothing their feathers and building a nest. Chickens kept in cages hardly have any material to scratch on and only one single laying nest is available per cage. Hens are frustrated and subject to other complications such as stress, aggression, and feather pecking. All these stressfactors and behaviors may degenerate into cannibalism or self-harm. GAIA is convinced that a ban on cage systems improves the living conditions for millions of laying hens in Flanders.

GAIA already convinced many companies to abandon the use of eggs coming from caged hens. “Not only citizens but also supermarkets and brands are increasingly willing to switch to more animal-friendly husbandry systems. "Minister Weyts: it’s time the lockdown ends for laying hens too”, concludes Vandenbosch.

GAIA  displays a total of 260 large-format posters on the Flemish roads until 31 May 2020.