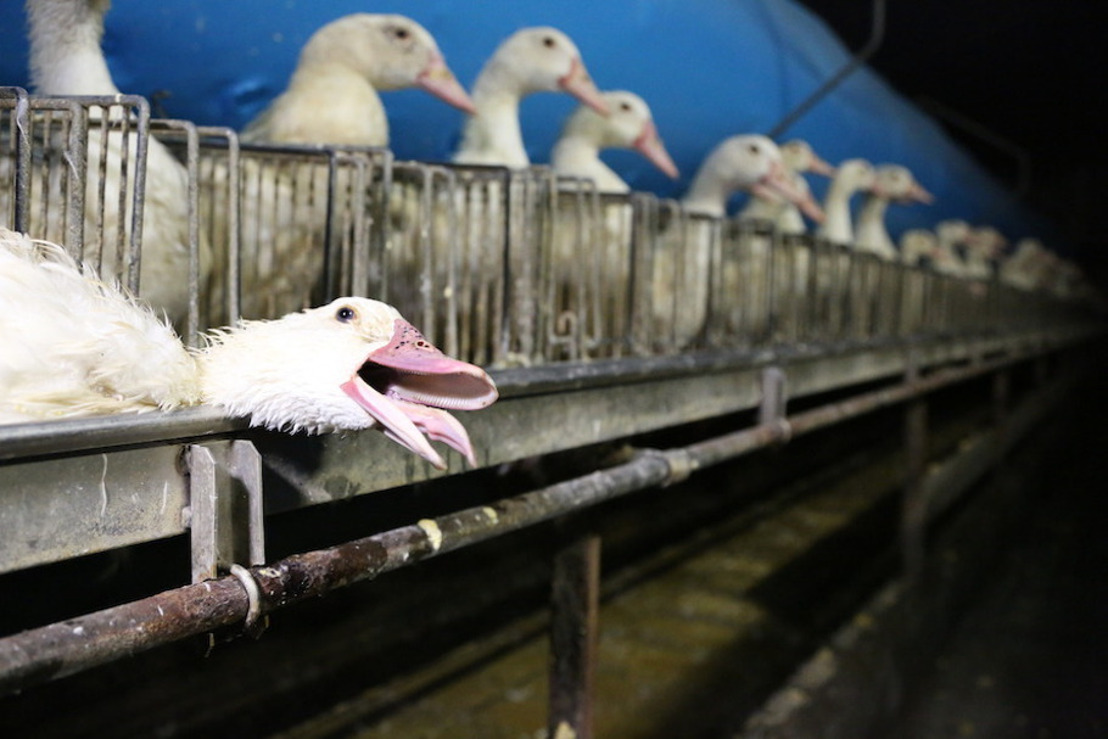 Friday, December 4, 2015 — Michel Vandenbosch, President of GAIA and Professor Donald M. Broom of Cambridge University in the UK presented a new scientific report which, at GAIA’s request, evaluates the impact of foie gras production on the welfare of ducks. “The results of this report by the University of Cambridge are unequivocal. The practice of force-feeding causes a sharp deterioration in the welfare of the ducks,” said Professor Broom. “In light of the conclusions of this report, GAIA demands that force-feeding be banned,” said Michel Vandenbosch.

The report, prepared at the request of GAIA by the prestigious University of Cambridge in the UK, was co-authored by Doctor of Biology Irene Rochlitz and supervised by Professor Donald M. Broom, a world-renowned authority on animal welfare.

The report's findings are clear and categorical: force-feeding deprives the animal of control over an aspect of life crucial to its survival; namely, to ingest appropriate food in appropriate amounts. The loss of this control results in marked deterioration of the animal’s welfare. During force-feeding, ducks are fed by the insertion of a tube in their esophagus twice per day over a period of 12 to 15 days.

The practice of force-feeding can also cause injury and pain to the bird’s beak, head, eyes, nostrils, neck and upper digestive tract in birds, as well as causing obesity, with consequent injuries and pain to the legs, thereby interfering with normal movement. Furthermore, the large amount of high-energy food, which the ducks must ingest causes them considerable heat stress. Consequently, they spend much of their time panting in an effort to regulate their temperature.

The report also highlights that force-feeding causes liver disease, specifically steatosis, which greatly increases the animal’s risk of premature death. The pathological state of the liver is evidenced by the deterioration in its ability to detoxify the animal’s body, as well as the lesions caused to liver cells by the end of the force-feeding period. “By the end of force-feeding, the duck’s liver is 7 to 10 times its normal size,” says Professor Broom.

Professor Broom adds: “Compared with control groups, the force-fed ducks show a series of behavioral changes indicating an attack on their well-being: immobility, prolonged periods of lying down, little preening or interaction, and prolonged gasping.” The French Poultry Technical Institute mentions a mortality rate of from 2 to 5%. These figures are clearly disproportionate to the mortality rates of Muscovy ducks on fattening farms in England, which are at 0.2% in the two weeks preceding slaughter. In addition, the report states that the current conditions of foie gras production meet only three out of twelve criteria and not one animal welfare principle provided by the European Welfare Quality® project, used to measure the well-being of livestock. “In light of the conclusions of this report, GAIA requests that force-feeding be banned. If industry wishes to continue producing foie gras, it can be done without force feeding,” said Michel Vandenbosch.