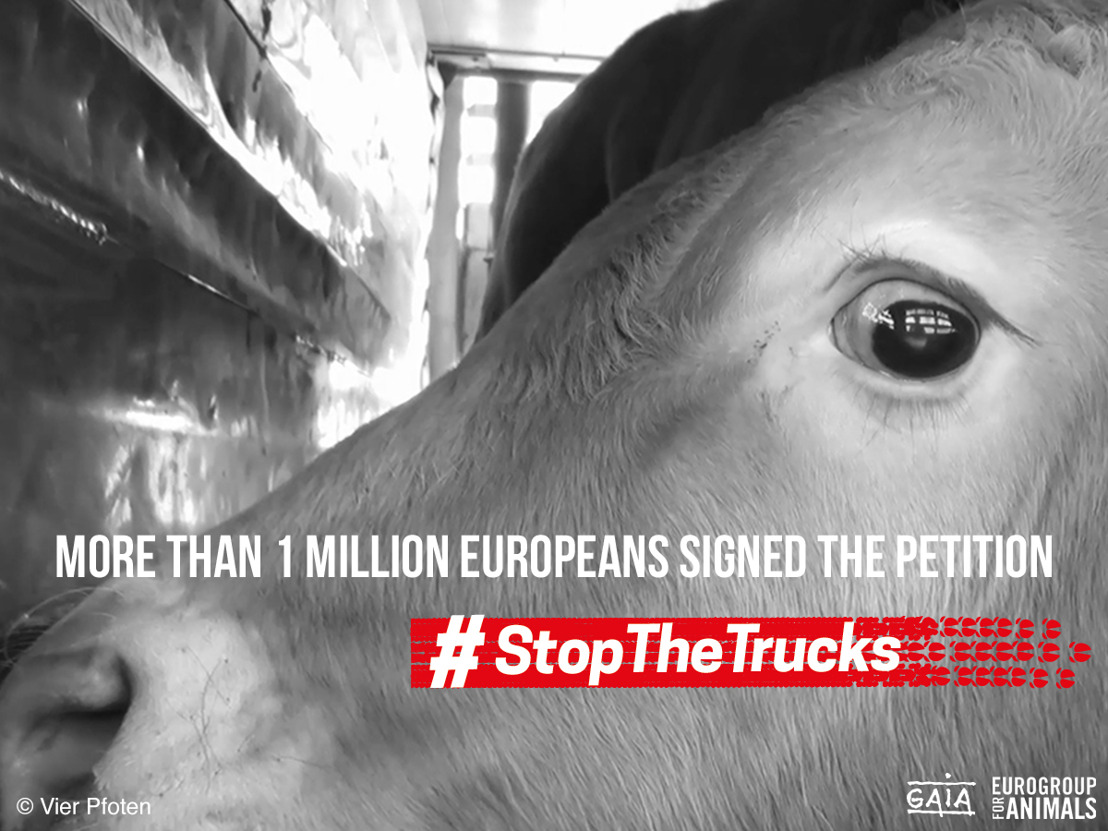 Tuesday, June 20, 2017 — 1.069.715 signatures: GAIA has just reached this landmark figure in its joint European campaign to end the suffering of nearly one billion poultry and 37 million cattle, equines, goats and sheep that are transported alive within the EU, as well as to Turkey and the Middle East. The campaign, which was launched together with Eurogroup for Animals in 27 countries in March 2016, calls for an immediate review of EU legislation on the protection of live animals during transport.

“The resounding success of our ‘Stop the Trucks’ campaign should send a strong message to the European Commission. No more waiting. The current legislation is largely insufficient. The EU must act now to save hundreds of millions of animals each year from the terrible suffering caused by long-distance transport,” says Ann De Greef, director of GAIA.

Support from the Belgian ministers of animal welfare

To this groundswell of public opinion is added that of our three regional Ministers of Animal Welfare, Carlo Di Antonio (cdH), Bianca Debaets (CD&V) and Ben Weyts (N-VA).  Last July, these three Ministers publicly addressed a request to the European Commission for a revision of EU Regulation 1/2005 on the protection of animals during transport. For GAIA, any revision must include a substantial decrease (maximum 8 hours) in the length of time of transport of live animals, much stricter and more precise rules on conditions of transport, as well as the level of training of drivers and managers. This request follows on the heels of an initial request submitted the previous year by the German, Danish and Dutch governments, and seconded by Austria and Sweden.

From urgency to action

For many years, in one investigation after another, GAIA and its partners have endeavoured to focus attention on the inhumane conditions in which animals are transported. Interminable hours of discomfort await them, packed in with others of their kind. And when they do finally reach their destination, often after a journey of several days, they are exhausted, starved, dehydrated and often injured. Some of them don’t even survive the trip.

“Unfortunately, it’s only too apparent that nothing has really changed in recent years. This is probably due to the complexity of the existing rules, the unwillingness of carriers to respect them, as well as to the negligence of competent authorities,” comments Ann De Greef. “Hence the urgent need to review the applicable legislation, which in particular should drastically shorten the length of transport times. Ultimately, the transport of live animals should be replaced by transport only of meat and carcasses,” she adds. Before concluding, “We call on the EU Commissioner for Health and Food Safety, Vytenis Andriukaitis, to introduce an amendment into the EU Regulation which limits the transport period to 8 hours, and which replaces the transport of live animals by the transport only of meat and carcasses.”

No time to waste

Reineke Hameleers, director of Eurogroup for Animals, said: “The EU cannot afford to ignore the signatures of more than a million of its citizens, who are calling for an end to the terrible ordeal inflicted on these animals during long-distance transport. In its current form, the EU Regulation on the transport of animals seriously undermines their welfare.  There is no time to waste. The European Commission must act now and respect the wishes of EU citizens by putting an end to the inhumane transport of live animals, where their suffering ends only at the slaughterhouse.”