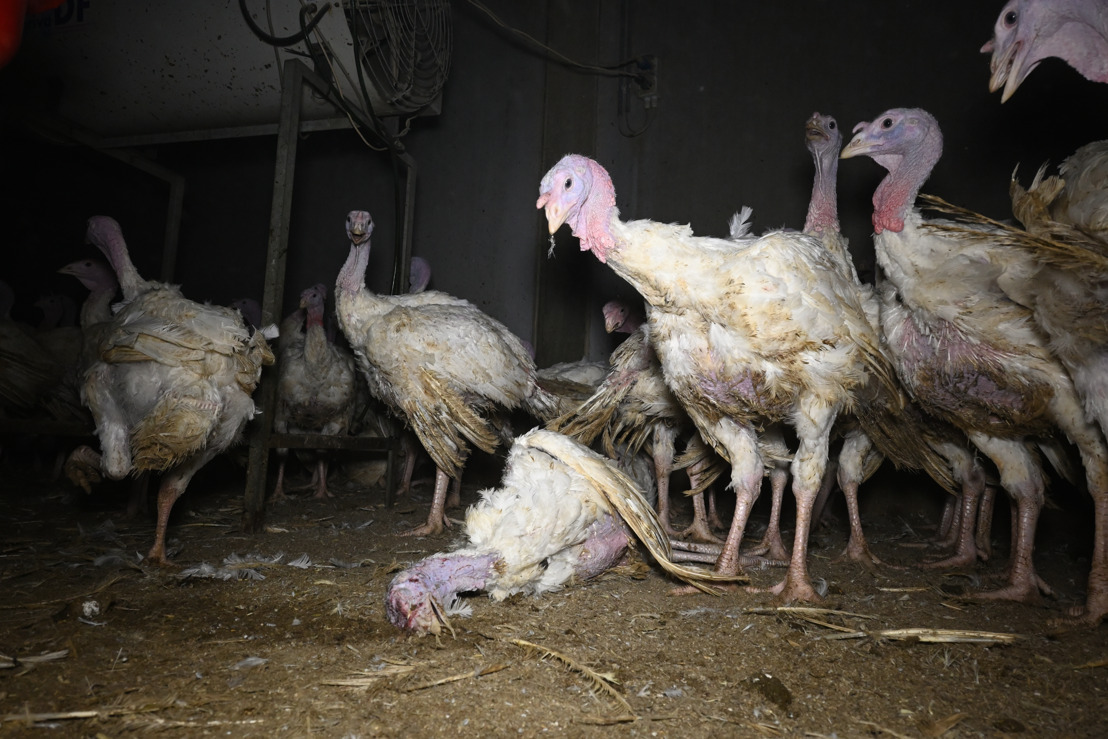 Belgium still does not have specific legislation to protect the welfare of turkeys. For example, there is no clear legal limit concerning stocking density: breeders therefore determine for themselves the number of turkeys they wish to cram into a henhouse. “It is practically impossible to squeeze even more turkeys together, because hardly any animals would survive and the death rate is already so high,” says Ann De Greef.

“The appalling conditions our investigation team found in the turkey farms we visited shows what the absence of concrete standards leads to. We can't just settle for minimum standards that make little difference to the well-being of turkeys,” she explains. GAIA therefore demands strict regulations that will set the bar very high to make a real difference and put an end to the recently exposed abuses.

Many turkeys crowded to the point where no additional animals can be added, stocking density taken to the extreme; numerous turkeys with necrotic tissue on their foreheads and hindquarters as a result of pecking, necrotic tissue on the ischium, elbow and other parts of the body, turkeys with bedsores, heavily soiled plumage (by faeces) and tangled, heavily soiled abdominal area, various decomposed and undecomposed carcasses, black scabs on bare skin caused by contact excoriation on a bony protrusion, severely lame turkeys, sick, weak and dying birds unable to stand on their feet in soaked litter, soiled with urine and faeces, wrotten, turkeys with bony protrusions, birds with skin sores and heavily infected subcutaneous tissue, with gangrenous scabs on the scapula, severely weakened turkeys unable to reach the watering hole (starving and thirsty), several carcasses gnawed by one or more cats near the boot storage area (we saw a cat who was able to access the carcasses and feed on them); a basin filled with filthy and disgusting water, stagnant water near where a carcass was found; a large number of turkeys with cut beaks, etc.

Turkeys live in their own faeces and those of their fellows, in overcrowded barns, injured due to pecking behaviour which is due, among other things, to a hierarchy disturbed by the excessive number of crowded animals. As in 2019, GAIA observed appalling necrosis (necrotic skin where pecking wounds were inflicted) on the heads and flanks of many turkeys.

GAIA therefore calls for very strict legal standards for the breeding of turkeys, which meet the natural behavioural needs of the animals. Stocking densities should be much lower, animals should be able to roam outdoors, perches should be adequate and sufficient, the use of slower growing breeds should be made compulsory, bedding should be dry and sufficient enrichment should be provided (such as straw bales to peck).

As the breed used in intensive turkey breeding is selected for rapid growth, turkeys grow so fast that many suffer from lameness. These animals can die of hunger and thirst because they can no longer reach the watering hole and the feeder. Birds are also unable to clean their plumage, a vital need. "The current intensive farming of turkeys in Flanders is a crying shame," says Ann De Greef. "The whole system is still a disgusting mockery of the concept of animal welfare, rotten through and through. The situation in Flemish turkey farms is totally unacceptable. There is an urgent need to adopt standards. Concrete, genuinely strict and animal-oriented legal regulations that will effectively protect turkey welfare must be a top priority, otherwise it would be better to stop and no longer breed meat turkeys in Flanders."

The veterinarian François Sivine, who analysed the images, speaks of general lack of hygiene and a deplorable quality of litter. He calls the "infirmary" (the place where some animals are kept in isolation) "unbelievable": the litter on the ground is filthy and soiled with faeces and soaked in ammonia. The average morbidity (disease rate) is "excessive". Sivine draws a damning observation: "The management of these facilities and their hygiene, as well as in the individual monitoring of animals, is totally unprofessional. This is pure negation of any notion of animal welfare. The behaviour of those responsible for the farms in question is in every way contrary to the most elementary principles of animal protection and welfare."

The Walloon Government recently adopted at first reading a draft decree relating to the welfare of turkeys on farms (the intensive / industrial type does not yet exist in the Walloon region). However, the Walloon Minister for Animal Welfare, Céline Tellier, and her colleagues preferred not to follow the recommendations of the experts of the Walloon Council for Animal Welfare who proposed to ensure a density in each henhouse of maximum 30 kg/m2 for females and 36 kg/m2 for males, which corresponds to 3 females per m2 and 2 males per m2. The draft decree provides for 42 kg/m2 for females (4 per m2) and 48 kg/m2 for males (3 per m2). "Obviously, the interests of certain lobbies weigh more in the balance than ensuring a level of decent animal welfare," remarks Ann De Greef. GAIA, just like the Walloon Union for Animal Welfare and the Francophone Federation of Shelters for Horses and Farm animals for that matter, ask Céline Tellier and the other ministers of the Walloon Government to amend the text for the passage in second reading.