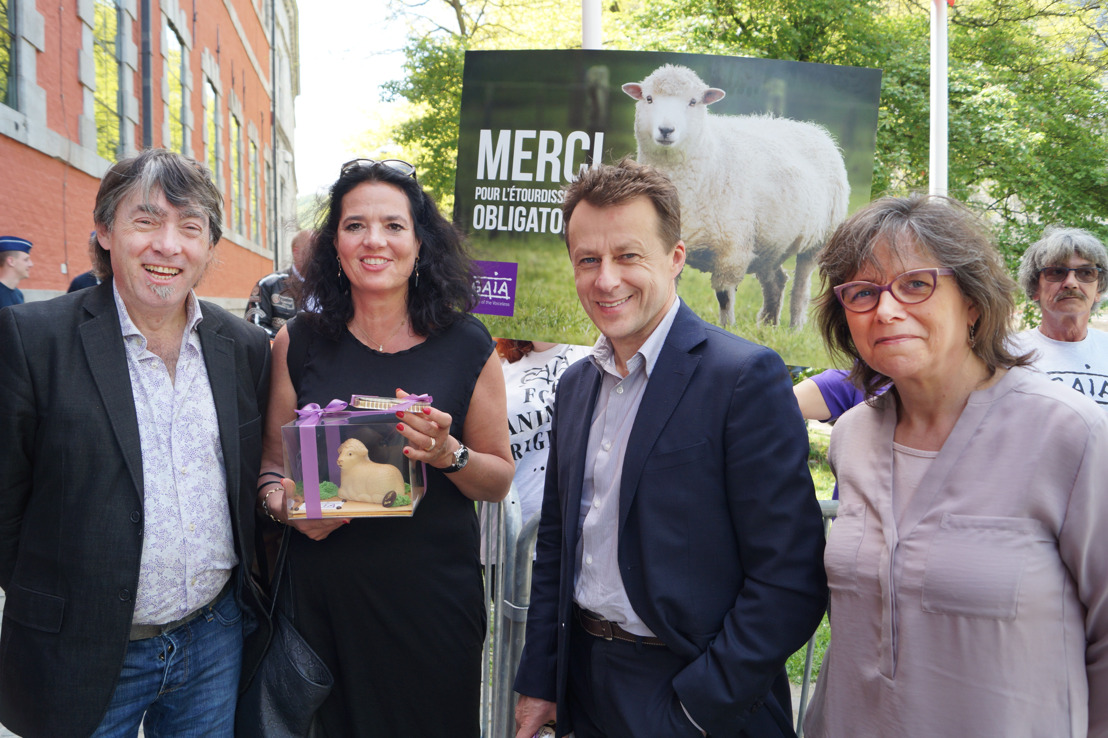 Wednesday, May 17, 2017 — Twenty GAIA activists staged a happening this afternoon before the Walloon Parliament in recognition of an anticipated majority vote by MPs in favour of a ban on (ritual) slaughter without stunning in Wallonia, without exception. Such a ban will enter into force on 1st September 2019.  In particular, the President of GAIA, Michel Vandenbosch and the Director of GAIA, Ann De Greef, presented specially-made chocolate sheep as a token of gratitude to MPs Christine Defraigne (MR) and Josy Arens (cdH), the instigators of the proposal (which was also countersigned by the Socialist Party), as well as to Walloon Minister for Animal Welfare, Carlo Di Antonio (cdH), who strongly supported the proposal. GAIA also gave chocolate sheep to the other MPs present. “This is a major day for animal welfare and GAIA. For over 22 years, we have strived hard to achieve this goal,” concluded Michel Vandenbosch.

This morning, the instigators of the proposal as well as the minister stressed that the decree balances animal welfare with religious freedom. Animal Welfare Minister, Carlo Di Antonio, added that this decree is the result of two years of intense negotiations.

“We call on all MPs to honour the explicit wish of the Walloon citizens, and we are extremely confident that the proposal should once again enjoy broad consensus within the Walloon Parliament,” said Michel Vandenbosch, President of GAIA.

“By voting in favour of mandatory stunning before all slaughter, including ritual slaughter (and in slaughterhouses), the Walloon Region shows that it takes animal welfare seriously, by applying a fundamental ethical principle, that of abstaining from inflicting avoidable and useless pain and suffering on animals,” adds Michel Vandenbosch. “After all, we live in a parliamentary democracy where members of parliament vote laws and not in a theocracy!”